What Do Water Fluoridation Supporters Say? 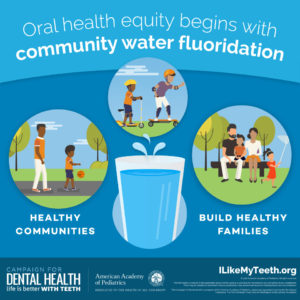 “Fluoride makes the entire tooth structure more resistant to decay and promotes remineralization, which aids in repairing early decay before damage is even visible. Studies have confirmed the most effective source of fluoride to be water fluoridation.”

“Instead of drilling holes to fix cavities, dentists would rather educate the public on how to avoid developing tooth decay in the first place. Drinking tap water to receive fluoride is safe, and it’s easier on your wallet than going to the dentist for a filling.”

“Fluoridation of public water supplies is a safe, economical, and effective measure to prevent dental caries.”

“Water fluoridation is a cost-effective means of preventing dental caries, with the lifetime cost per person equaling less than the cost of 1 dental restoration. In short, fluoridated water is the cheapest and most effective way to deliver anticaries benefits to communities.”

“Dental decay is a common but preventable, chronic disease. It is our youngest children who are at the greatest risk for developing early dental disease while not having access to a dental care home. … Without community water fluoridation the incidence of this disease and its attendant complications will increase.”

“Community water fluoridation, which adjusts the fluoride in water to a level sufficient for preventing and controlling tooth decay, reduces tooth decay by 30–50%.”

“Although great progress has been made, nearly 28% of public water systems do not have the capacity to deliver—and approximately 100 million Americans do not have access to—optimally fluoridated water. Many communities need support to upgrade or purchase new water systems and fluoridation equipment.”

“… it has been shown that children with the greatest dental need and who are at highest risk for tooth decay benefit the most from water fluoridation.”

The resolution also stated: “The Association recommends that federal, state, and local agencies and organizations promote water fluoridation as the foundation for better oral health.”

American Council on Science and Health:

“Fluoride is harmless at the levels necessary for maximum (dental) benefits. Thousands of studies on fluorides and fluoridation have been completed in the last 50 years — more than 3,700 since 1970 alone. Over 50 peer-reviewed epidemiological studies have dealt with the claim that fluoridation increases cancer risk. None has substantiated the claim.”

“More than 70 years of scientific research has consistently shown that an optimal level of fluoride in community water is safe and effective in preventing tooth decay by at least 25% in both children and adults. Simply by drinking water, Americans can benefit from fluoride’s cavity protection whether they are at home, work or school.”

“Fluoride in water is the most efficient way to prevent one of the most common childhood diseases – tooth decay. An estimated 51 million school hours and 164 million work hours are lost each year due to dental-related illness. Community water fluoridation is so effective at preventing tooth decay that the Centers for Disease Control and Prevention named it one of 10 great public health achievements of the 20th century.”

“It has been called one of the 10 great public health achievements of the 20th century, yet 70 years after its introduction in the United States, community water fluoridation can no longer be taken for granted.”
“ADEA supports and encourages fluoridation of community water supplies and the use of topical fluoride.”

“Good scientific evidence supports the use of community water fluoridation and the use of fluoride dental products for preventing tooth decay for both children and adults.

“Adjusting the level of fluoride in drinking water first used fluoride as a preventative for tooth decay in Grand Rapids, Michigan. Fluoridation of drinking water has been used successfully in the United States for more than 50 years.”