Last fall, the National Toxicology Program (NTP) released a draft monograph with the conclusion that “fluoride is presumed to be a cognitive neurodevelopmental hazard to humans.” Before finalizing its monograph, NTP asked a committee of the National Academies of Sciences, Engineering and Medicine (NASEM) to assess whether its conclusion is supported by the scientific evidence. In a new NASEM report, the committee says that the NTP failed to provide adequate scientific evidence for its conclusion that fluoride poses a cognitive neurodevelopmental risk. The committee expressed “substantive concerns” with how NTP evaluated the evidence.

When the NTP’s draft monograph was released, it generated much discussion among pediatricians, dental professionals and public health officials. These health leaders wondered whether the 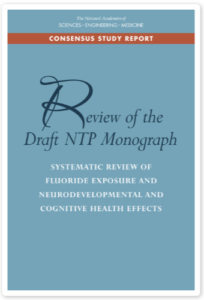 NTP document could prompt unnecessary fear or confusion among parents and the public. In its review, the NASEM committee also appeared to recognize this potential for misplaced concern:

“Although the monograph provides some discussion of dose-response relationships, NTP did not conduct a formal dose-response assessment and needs to state clearly that the monograph is not designed to be informative regarding decisions about fluoride concentrations for water fluoridation.”

The NASEM committee was not asked to adopt a position relating to fluoride’s safety. Its only role was to review NTP’s draft monograph to determine whether it felt the document’s conclusion accurately reflected the scientific evidence. The Committee’s report stated that NTP would need to conduct and present more analysis before it could reach and support a conclusion about fluoride’s effect on neurodevelopment.

The NASEM report identifies a number of concerns about the NTP monograph. For example, the Committee noted that the studies that NTP included in its systematic review “did not undergo rigorous statistical review” and called this a “flaw” because some of these research papers contained errors or other issues that “compromised their internal validity.” NASEM also wrote that NTP classified some studies with a low risk of bias even though “the measure of the neurodevelopmental and cognitive outcome was seriously flawed.”

It was both prudent and appropriate for NTP to seek NASEM’s review before finalizing its document. Given that tooth decay is the most common chronic disease of children, fluoride remains a vital pillar in our nation’s efforts to reduce dental disease. Fluoride in tap water, varnish, toothpaste and other products are recognized as key elements in cavity prevention. Moving too quickly to finalize a document like the monograph could have confused or misled communities about fluoride.