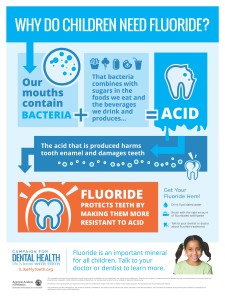 Fluoride is Effective: A Summary of the Research

Decades of research confirm the benefits of water fluoridation. Some people may question the value of fluoridating water at a time when fluoride toothpaste is widely used and children can get fluoride treatments from dentists. The following peer-reviewed studies and reports answer this question because many of them were conducted within the past 20 years — when both fluoride toothpaste and fluoride treatments were widely available. This research demonstrates the crucial, added protection against tooth decay that fluoridated water provides. The following research is only a small sample of studies confirming the value of fluoridating public water systems.

The U.S. Task Force on Community Preventive Services, a blue-ribbon panel of experts, examined 21 studies and concluded (2000) that fluoridated water reduces tooth decay by a median rate of 29% among children of ages 4 to 17.

A study of Alaska children (2011), conducted by the Centers for Disease Control and Prevention, showed that children living in non-fluoridated areas had a 32% higher rate of decayed, missing or filled teeth than kids in fluoridated communities.

A Nevada study (2010) examined teenagers’ oral health and concluded that living in a community without fluoridated water was one of the top three risk factors associated with high rates of decay and other dental problems.

A study of more than 17,000 Australian children found that fluoridated water’s “preventive effect was maximized by continuous exposure both before and after eruption (i.e., when teeth first appear in the mouth).”  This finding refutes the claim made by fluoridation opponents that topical application of fluoride is the only effective way to secure fluoride’s benefits.

Nine studies were analyzed (2007) in the Journal of Dental Research to estimate water fluoridation’s impact on adult teeth. This report concluded that fluoridation reduced decay by 27%. The co-authors noted the study’s significance for seniors because Medicare does not cover routine dental services and this lack of coverage “increases the need for effective prevention” of decay among older adults.

A study in the American Journal of Public Health (2010) found that the fluoridated water consumed as a young child makes the loss of teeth (due to decay) less likely 40 or 50 years later when that child is a middle-aged adult.

A study of nearly 3,800 adults in Australia (2013) determined that fluoridated water reduced tooth decay by a range of 21% to 30%. The study found that “greater lifetime exposure to water fluoridation” was connected to lower decay rates.

3. Fluoridation helps to close the gap in decay rates among various groups

The co-authors of a study (2010) examining the long-term impact of water fluoridation in the U.S. wrote that their findings suggest that the benefits of fluoridation “may be larger than previously believed” and that fluoridation has “a lasting improvement in racial/ethnic and economic disparities in oral health.”

The Canadian Journal of Public Health (2012) published a study that relied on dental health data from 1,017 Canadian children and determined that fluoridated water had a “robust” effect, producing “better health outcomes” that were “apparent across all income categories.”

Australia’s National Health and Medical Research Council (2007) reviewed 77 studies and concluded that fluoridation “remains the most effective and socially equitable means of achieving community-wide exposure” to the decay-prevention effects of fluoride.

4. Fluoridation saves money by reducing the need for fillings and other dental treatments.

A Texas study (2000) found that fluoridation saved the state Medicaid program an average of $24 per child, per year.