Among the many sound reasons to support fluoridation, there is one that is trumpeted less frequently than the others, perhaps because it sounds – well – pretty radical: community water fluoridation (CWF) is a powerful weapon in the fight for social justice and health equity.

Anti-fluoridation activists frequently argue that one reason government should cease investment in CWF is that it is ineffective at preventing dental disease and therefore a waste of taxpayer dollars. But a British report published in March 2014 contributes additional evidence to the contrary, and reinforces the benefits of fluoridation for low-income children.

When poverty status and ethnicity were taken into account, the report’s findings were even more striking:

Having controlled for other factors, this report demonstrates yet again that fluoridation effectively prevents dental disease, and it does so with no adverse health effects. Not only are children benefiting from CWF, but poor children are benefiting the most.

Fluoridation Around the Globe 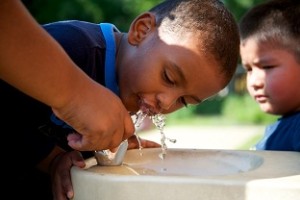 England is not the only country where health officials are discovering impressive evidence of fluoridation’s impact on health equity. Canada has a national health insurance program, but it does not include dental benefits. A 2013 report by the Wellesley Institute examined the oral health needs of Canadians and concluded:

“Given the inequitable access to and lower utilization of dental services, those with lower income will be less able to ensure adequate fluoride exposure if water fluoridation is removed.”

And Canada isn’t the only country that has touted the benefits of CWF. The Proof Around The Globe: Fluoridation is Safe and Effective one-pager summarizes four examples of reports or studies that were conducted overseas, strengthening the case for communities to fluoridate drinking water.

Like a rising tide that lifts all boats, municipally fluoridated water reduces dental disease in the entire population, regardless of insurance coverage, access to a dentist, or the ability to pay for care. This simple investment of public dollars is estimated to save as much as $38 for every dollar spent, according to the Centers for Disease Control and Prevention (CDC).

Many of the anti-fluoridation activists who oppose investing in public health are aligned with anti-government movements for whom CWF is tantamount to a subsidy for the poor. If compassion does not motivate opponents, fiscal reason should. Preventing tooth decay among low-income children ultimately reduces costs in public health insurance programs such as Medicaid and CHIP. Is that really radical?