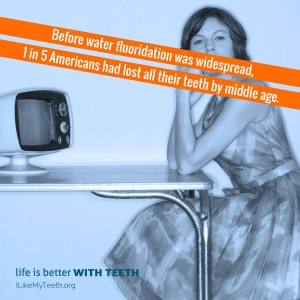 Among the generations of Americans who grew up before the implementation of community water fluoridation in the 1950s, some will likely tell you that “you don’t know what you’ve got till it’s gone,” referring to the value of their teeth. In the early 1960s, fully 20 % of people between the ages of 45 and 54 had lost all of their permanent teeth. That’s 1 in 5 middle-aged adults. Can you imagine what life would be like if you lost ALL of your teeth?

Fast forward 20 years, and data gathered following the implementation and diffusion of fluoridation show that only 9.1 % of middle-aged adults reported having lost all of their permanent teeth, a 10.9 % decrease.

Given these statistics, it is reasonable to say that people receiving the public health benefits of water fluoridation have a lot to be thankful for. They can rest easy knowing that in addition to good oral health practices, something as simple as drinking good old fashioned tap water helps ensure that their chompers serve them for years to come.