Why is Pizza Crust in New York So Good? It’s the Water!

In the aftermath of the Flint, Michigan water crisis, the American public is growing increasingly concerned about the safety of its water.

The process of filtering and disinfecting water, whether from a surface or underground source, is not something most of us generally concern ourselves with. 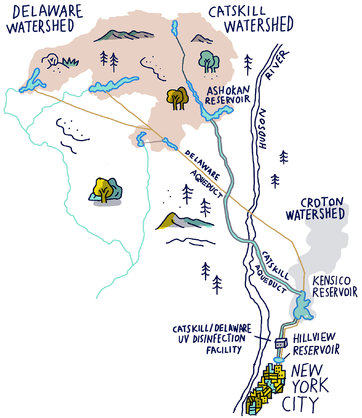 The New York Times recently published an explanation, including charming illustrations, entitled How New York Gets Its Water. The New York City Bureau of Water Supply, which celebrated 50 years of fluoridation in 2015, serves 9.5 million people. That’s a significant number. So, even if you’re not in, around or from New York, it’s worth a read.

Beginning with the streams, rivers, lakes, and reservoirs that are the source of the City’s water, many miles upstate in the Catskill Mountains, the Bureau takes steps to safeguard not just the water but the land that surrounds it. They constantly monitor and test, using robots and field scientists to track temperature, pH, nutrient and microbial levels. Ultraviolet light supplements other customary disinfectants. A schedule of large-scale system upgrades is being followed.

Once water is distributed to the 5 boroughs that make up New York City, testing for contaminants, including lead, continues. Every day, field scientists visit 50 of the 1,000 water sampling stations in the metropolitan area to check levels of chemicals that prevent the kind of pipe corrosion that caused lead to leach into the water in Flint.