Posted March 29, 2016 & filed under Fluoride and Public Health, Fluoride in the News, Fluoride, Oral Health, and Access to Care.

On March 25, 2016, the Centers for Disease Control and Prevention (CDC) released 2014 Water Fluoridation Statistics showing that, between 2008 and 2014, nearly 19 million more Americans benefited from water fluoridated to the optimal level to prevent tooth decay. Just since 2012, the number of Americans receiving fluoridated water grew by more than 3.5 million. This is good news for a lot of people. 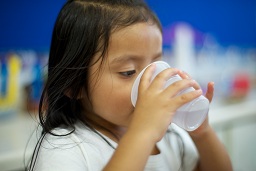 Although we know that the average number of decayed teeth per person has decreased since fluoridation began, tooth decay is still all too common. Given that 92% of American adults (age 20-64) reported in the last National Health and Nutrition Examination Survey (NHANES) that they had dental caries in their permanent teeth, widespread preventive measures remain necessary. Fifty-nine percent of teens (age 12-19) had decay in their permanent teeth. And 42% of children (age 2-11) experienced decay in their primary teeth.

Sadly, although tooth decay is preventable, it remains the most common chronic disease of early childhood. And although gains are being made, far too many children, adolescents and adults experience unnecessary pain and suffering.

Happily, the data just released demonstrate the upward momentum of one of the most effective, equitable and inexpensive forms of prevention: community water fluoridation (CWF). Everyone benefits – families and communities alike – when we promote and defend this public health practice.