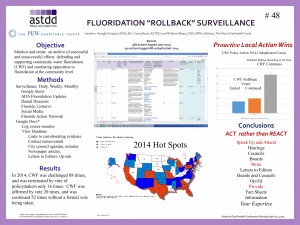 The Martinsville, Virginia City Council voted on August 25, 2015 to continue community water fluoridation (CWF). Despite a vocal campaign by fluoride opponents, Martinsville joins a growing number of municipalities to reject attempts to deprive residents of the benefits of fluoridated water.

In 2014, water fluoridation was challenged in 88 communities around the country and was retained in 72 instances. Whether by action of a local decision-making body or in public referenda, fluoridation is maintained far more often than not.

Kudos to supporters on the Martinsville City Council and advocates for CWF. The real winners, of course, are Martinsville residents, whose health will continue to benefit!