Usually, community water fluoridation (CWF) is a policy adopted by a vote of a city council, a water utility board or another local governing entity. Yet, occasionally, CWF is placed on an election ballot and referred to voters, who decide the issue. Two recent studies offer helpful insights about CWF referenda are held.

When CWF goes to the ballot, local media tend to elevate its coverage and approach it as they would any other election issue. Even though most opposition arguments are not science-based, reporters and editors may gave them equal play with pro-CWF messages. According to a recent study, this concern about how the media approaches CWF is very real. 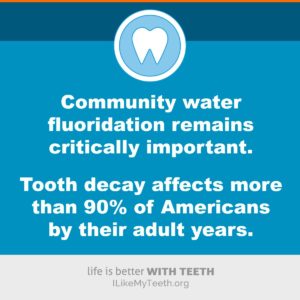 In this study, researchers reviewed more than 200 articles or editorials over a 57-year period from local media who reported on a referendum about CWF. In their findings, published in the Journal of the American Dental Association, the researchers found that media coverage generally balanced pro-CWF with anti-CWF arguments, which reflected “complaints by scientists that journalists force a false balance of arguments and, hence, generate controversy.”

Another new study reveals that a community with higher health literacy is more likely to support CWF in a voter referenda. This cross-sectional study examined results in more than 900 voter precincts from three large U.S. cities in which CWF referenda were held between 2000 and 2013. This analysis suggests that an increase in health literacy scores of one standard deviation predicted a 12 percentage-point increase in support for CWF. (For a quick primer on standard deviations, check out this video.)

The coauthors of the study explain why health literacy is so critical when a referendum is held to decide on CWF:

Conflicting information creates confusion, which prompts voters to maintain the status quo and to avoid potential risk, or to simply not vote at all. The informational environment of voters is critical to understanding how voters behave.  … Health literacy serves as an indicator of voter ability to process health information, including dental information.

Dental and medical professionals (and others who care about building healthy communities) have crucial roles to play in raising their communities’ health literacy. The language that providers use can make it easier or tougher for people to understand why oral health matters—and the important role that fluoride plays in prevention. In addition to speaking in plain language to patients, health providers should help community health workers, civic leaders and others separate fact from fiction.

The Campaign for Dental Health has a lot of resources on our Learn & Share page to help health professionals communicate clearly and respectfully with their communities.