Posted February 17, 2016 & filed under Children's Oral Health and Fluoride, Fluoride and Public Health, Fluoride in the News, What the Experts Say about Fluoride.

Five years ago this month, the city council of Calgary voted to cease community water fluoridation (CWF). Critics of this health practice said the absence of fluoridated water would make no difference. But ever since Canada’s 3rd largest city made that decision, a variety of health professionals have expressed concern, and more and more signs suggest that Calgary’s decision to end CWF has compromised the health of its residents. 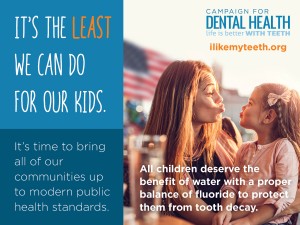 This week, a new peer-reviewed study was released that examines the effect that Calgary’s decision appears to be having on oral health equity — the goal of closing the gaps in dental health quality that exist based on income, race or other factors. This study found “increasing inequities in [tooth decay] following cessation of CWF,” and the co-authors recommended additional research to better clarify the impact of Calgary’s decision.

The study considered factors other than community water fluoridation but found no other factor that explained the disturbing trend toward more inequity. For example, the co-authors pointed to data suggesting that access to dental care “has, if anything, increased in Calgary.” In addition, the co-authors found that oral health programs for school children in Calgary appear to have expanded since CWF was ended.

The study’s conclusion reinforces the concerns expressed in a 2013 report by the Toronto-based Wellesley Institute. “Removing water fluoridation will have general adverse oral and overall health effects,” the report contended. And the report concluded that in communities which cease CWF, the negative impact will be disproportionate. “Lower income and other health-disadvantaged populations experience poorer oral health and significant barriers to dental care. As a result, the removal of water fluoridation will be especially damaging for already health-disadvantaged populations and will worsen oral health inequities.”

Circling back to our headline, the answer is everyone. Yet, as this Calgary study reveals, residents who already face income, racial, ethnic or other barriers tend to pay the heaviest price.